The most funny part of tourist faces 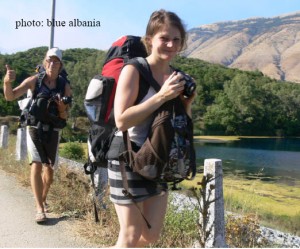 They are the simplest and funniest tourists worldwide. Truly adventurous and fond of travel, they are everywhere, hauling the big bags containing everything they need - sometimes, even the "hotel and restaurant." The bags are the symbol that has given them their name, their identity: "backpacker" means a person carrying a bundle or pack on the back.
The first such traveling adventurer, Giovanni Francesco Gemelli Careri, dates back over three centuries; his followers would start to move around the world much later, in the 1960's and 70's.
Travelers dedicated to getting to know foreign people and cultures, backpackers are usually young and friendly. They rarely squander money, use public transportation, and generally ignore modern technology. We often see them hitch-hiking towards their destination, dressed in light and practical clothing and holding water-bottles. Sitting on corners perusing maps, they are a pleasant sight throughout the summer. They roam freely, intent on cultural exchanges, diplomatically sharing particulars about places and among peoples. Backpackers began exploring Albania around 1997 and, since 2000, have decorated the whole country in the summer months.
We have met many of them during our excursions, finding that they have experienced similar problems: taxi-drivers and mini-vans. Unaccustomed to Albanian "strangeness", they have been unpleasantly surprised by prices of 20 - 30 euro for distances of no more than 20 km; some of the local chauffeurs obviously do not yet know the unwritten rule applicable to this genre of passengers! Practical and original as they are, many backpackers have countered the dilemma with penciled signs announcing their destination and insisting that the ride be "free-of-charge!" One of the Polish groups sporting such a cartoon made us laugh. These travelers are almost always satisfied with Albania, having enjoyed its stunning nature, its "exotic" occurrences, and - above all - its friendly and generous inhabitants.
William and Cloe from the UK
We met them on the outskirts of Himara, wanting to go to Dhermi. She told us, laughing, that her shirt was torn and that she had simply thrown her long red hair over it. They were friends who had left home in December,2009, and had been hitch-hiking 6 months, walking almost all of Europe.  Entering Albania in Korca, they had traveled the southern coast – Korca, Kolonja,
Permet, Gjirokaster, Saranda. The most astonishing place for them was Gjirokaster.
Mark from Germany
He was traveling with a group of friends, each of whom had taken a personal discovery route to Saranda. We met in Butrint and he asked us to leave him in Saranda. He was enjoying Albania principally because of its smiling and very friendly people.
Sebastian and Hanna from Poland
They were waiting in a filling-station at an intersection outside Saranda and, upon seeing our car, came running towards us with their heavy packs. Although wanting to go to Himara, they were happy to be left in Borsh. They loved to speak and we were eager to listen; in fact, many young
backpackers  like to talk c ontinually about their almost always positive impressions of Albania.
They had traveled on foot from Thethi to Valbona and planned to do the same across the southeast of the country. We stopped in Porto Palermo to surprise them with the castle of Ali
Pasha.  They were shocked to know that such a tresure had only recently become accessible after being closed for a long time. Klearko, the  guardian/guide of the empty but well-preserved fortress, is a local who loves his work. He is trying to learn a simple greeting in multiple languages in order  to keep pace with the growing influx of international tourists.
Our guests were delighted with everything. We left them in Dhermi where they encountered other young people from Poland whom they had previously met along the riviera.
Ema and Jirzhi from the Czech Republic
Their goals are similar: to see as much as possible; to walk as far as they can; to meet many people; to sample the local cuisine. Although they bring most of their food from their homes and are equipped with gas cooking-canisters as well as raw materials for food preparation, backpackers generally want to taste the specialties of their host countries. Ana and Jirzhi said they had eaten a delicious baked dish of meat and yogurt and had tried many different kinds  of pies. Over coffee in Dhermi, they asked us about the area’s offerings: what other than “harapash?” The vicinity of Vlore, particularly Llogora Pass, is famed for  this dish. Ana quickly wrote down the name in order to remember it. We asked about the average expenses of a round-trip adventure such as theirs. Traveling by train to the principal border-destinations, they
were able to cross Europe for no more than 200 – 300 euros. We asked everyone we met about what they had disliked during their visit in Albania; in addition to the van-drivers, the fertilizers was the proverbially expected answer.
4.0/5 rating (1 votes)
Tweet

We have 23 guests and no members online